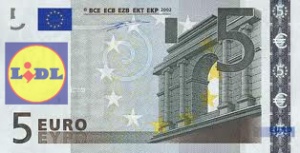 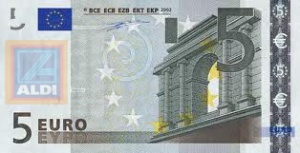 In a memo leaked this week Irish Mortgage Brokers plan  to combat debt reduction by’ Bold Homeowners’ by issuing cash that can only be spent on necessities! In a move to  control individual spending, plans are in place after secret negotiations with the IMF, The Central Bank, The Irish government and Irish retailers this week to print currency embossed with retailers logos in a bid to control spending. Homeowners who avail of Mortgage debt relief will have their spending controlled and will  be issued with currency that can only be redeemed for goods at allocated retailers, ‘much like the Butter vouchers of the 80’s’ one high up source commented!

Speculation is rife that the introduction of  the new  Flidl and Faldi as they will be known are a measure by Angie that insures that Ireland pays back its bail out package,  as the currency is only redeemable in either of the two multinational German retailers.

The U.O card. Also known as the ( UNDER OBSERVATION DEBIT CARD)

‘Bad Homeowners’ will also be issued with  New Debit cards in a bid to keep track on individuals spending, a measure being introduced by the Banks  at the request of The IMF. The cards will hold information of the individuals repayment progress and as the homeowners debt is cleared the card will allow the individual  controlled spending on non essential purchases, as determined by the bank themselves.

Plans are in place  to do away with the 1 & 2 cent coins in a bid to make savings to the exchequer. With the rising costs of copper and steel and in a bid to make revenue the Irish Government has come up with the brain child of an idea to collect and sell on their entire stock of 1&2Cent coins to Cyprus!
All prices for goods in Ireland will be rounded up  alleviating the weight in peoples pockets. This measure has been drafted  due to  complaints from Irish people at having to carry around large amounts of excess change!

Courtesy of the Department of SHOW ME UR MONEY.